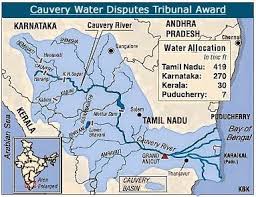 What is Cauvery water dispute?

Suggestions/ steps to be taken to solve the crisis:

As the impact of climate change is prominently visible we are going to face many more seasons of drought and points of conflict. It is important that we think on long term basis and in a coordinated fashion to survive the self created fallouts of natural phenomena.