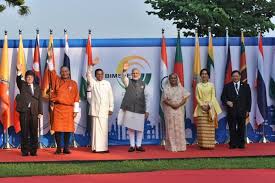 BIMSTEC (Bay of Bengal Initiative on Multi Sectoral Technical and Economic Cooperation) is the sub-regional group of seven countries in South Asia and South East Asia lying in the littoral and adjacent areas of the Bay of Bengal constituting a contiguous regional unity.

Established: 6 June 1997 through the Bangkok Declaration.

BIMSTEC has Fourteen priority sectors cover all areas of cooperation.

Six priority sectors of cooperation were identified at the 2nd Ministerial Meeting in Dhaka on 19 November 1998. They include the following:

After the 8th Ministerial Meeting in Dhaka on 18–19 December 2005 the number of priority sectors of cooperation increased from 6 to 14. The sectors are as follows,

The ADB has become BIMSTEC’s development partner since 2005, to undertake a study which is designed to help promote and improve transport infrastructure and logistic among the BIMSTEC countries.

So far, ADB has already finished the project so called BIMSTEC Transport Infrastructure and Logistic Study (BTILS). The final report of the said study from ADB has already been conveyed to all members and being awaited for the feedback. Other fields of cooperation will be designed later on. Its headquarters is situated at Mandaluyong, Philippines

Free Trade Area Framework Agreement in order to stimulate trade and investment in the parties, and attract outsiders to trade with and invest in BIMSTEC at a higher level. All members, except Bangladesh because of domestic procedure, became signatories to the Framework Agreement in the 6th Ministerial Meeting, as witnessed by the Prime Minister of Thailand and BIMSTEC’s Foreign Ministers.

Bangladesh later joined the Framework Agreement on 25 June 2004. The Trade Negotiating Committee (TNC) was set up and had its 1st ‘khyoiujholiach country’s chief negotiator act as TNC’s spokespersons, while TNC’s chairperson will report the result via STEOM to the Trade and Economic Ministerial Meeting. TNC’s negotiation area covers trade in goods and services, investment, economic cooperation, as well as trade facilitations and also technical assistance for LDCs in BIMSTEC. It was agreed that once negotiation on trade in goods is completed, the TNC would then proceed with negotiation on trade in services and investment.

The BIMSTEC (Bay of Bengal Initiative for Multi-Sectoral Technical and Economic Cooperation) countries have expressed commitment to combat terrorism in all its forms and manifestations.

He claimed that development potentials of this grouping were huge, stating, “With over 1.5 billion of population and combined GDP of USD 2.5 trillion, this region can be a dynamic engine of growth and development.”

“Establishment of BIMSTEC Buddhist Circuit and BIMSTEC Heritage Sites will be important initiatives to promote people-to-people contacts and tourism,” he added.

Highlighting various challenges of the region, he stressed collective will and concerted effort to overcome them.

In this regard, seven nations of BIMSTEC countries have issued Leaders Retreat Outcome Document mphasizing that there can be no justification for acts of terror.

1.BIMSTEC countries strongly condemned the recent terror attacks in the region. The states who encourage and support provide sanctuary to terrorists should be identified and held accountable. Strong measures against such states must be taken. They recognised the need for urgent measures to counter and prevent the spread of terrorism, violent extremism and radicalization.

2.They renewed their commitment to the early conclusion of BIMSTEC Free Trade Area negotiations, and direct the Trade Negotiating Committee and Working Groups to expedite the finalization of its constituent Agreements.

3.They agreed to expedite the signing of the BIMSTEC Convention on Mutual Assistance in Criminal Matters.

4.They also called for early ratification of the BIMSTEC Convention on Cooperation in Combating International 5.Terrorism, Transnational Organized Crime and Illicit Drug Trafficking.

6.They also stressed the necessity of pursuing sustainable development and of the implementation of the Paris Agreement on Climate Change.

7.They also recognized that cooperation in sustainable development of fisheries in Bay of Bengal region for ensuring food security and improving livelihoods of people.