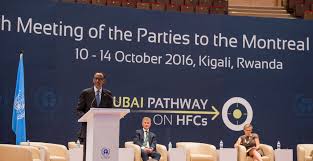 A historic global climate deal was reached in Kigali, Rwanda at the Twenty-Eighth Meeting of the Parties to the Montreal Protocol on Substances that Deplete the Ozone Layer (MOP28).

The so called Kigali Amendment which amends the 1987 Montreal Protocol aims to phase out Hydrofluorocarbons (HFCs), a family of potent greenhouse gases by the late 2040s.

Under Kigali Amendment, in all 197 countries, including India have agreed to a timeline to reduce the use of HFCs by roughly 85% of their baselines by 2045.

What are Hydrofluorocarbons (HFCs)?

HFCs are a family of greenhouse gases (GHGs) that are largely used in refrigerants in home, car air-conditioners and air sprays etc.

These factory-made gases had replaced CFCs under the 1987 Montreal Protocol to protect Earth’s fragile protective Ozone layer and heal the ozone hole over the Antartica.

Why they are harmful?

In recent times, it was found that HFCs have several thousand times capacity in retaining heat in the atmosphere compared to carbon dioxide (CO2), a potent GHG.

Thus, it can be said that HFCs have helped ozone layer but exacerbated global warming.

Currently, HFCs are currently the world’s fastest GHGs, with emissions increasing by up to 10% each year.

What is significance of the Kigali Amendment?

The Kigali Amendment amends the 1987 Montreal Protocol that was designed to close growing ozone hole in by banning ozone-depleting coolants like chlorofluorocarbons (CFCs).

Thus, amended Montreal Protocol which was initially conceived only to plug gases that were destroying the ozone layer now includes HFCs responsible for global warming.

This move will help to prevent a potential 0.5 degree Celsius rise in global temperature by the end of the century.

The Kigali Agreement or amended Montreal Protocol for HFCs reduction will be binding on countries from 2019.

It also has provisions for penalties for non-compliance. Under it,

All signatory countries have been divided into three groups with different timelines to go about reductions of HFCs. First group: It includes richest countries like US and those in European Union (EU). They will freeze production and consumption of HFCs by 2018. They will reduce them to about 15% of 2012 levels by 2036.

Third group: It includes countries India, Pakistan, Pakistan, Iran, Saudi Arabia etc. They will be freezing HFC use by 2028 and reducing it to about 15% of 2025 levels by 2047.

How it is different from Paris agreement?

The Paris agreement which will come into force by 2020 is not legally binding on countries to cut their emissions. The Kigali Amendment is considered absolutely vital for reaching the Paris Agreement target of keeping global temperature rise to below 2-degree Celsius compared to pre-industrial times.

–Reduction in pollution level in the country and addition to the Indian image of environment vigilant worldwide.
–Replacing climate pollutants from manufacturing with better and more sustainable alternatives.
–Incentive for R&D in cooling and refrigerating techniques which is more eco-friendly.
–Fulgilling global commitments made under SDGs and Paris agreement

Reduction in HFC would increase immediate investment demands in Indian cooling industry. This increased cost might be transfered to the end user which would further enhance the influx of foreign cheap cooling products to Indian markets.

Amendments though much awaited and negotiated would need true commitment to implement the same without indulging in the endless debate on -Who is the part of problem and who is not.