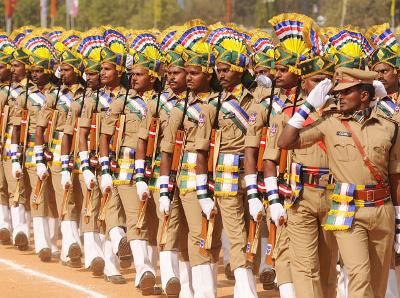 The security of India is maintained not only by the Indian Army but also by the Central Paramilitary Forces (CPMF) i.e. Indian Coast Guard, Special Frontier Force and Assam Rifles and the Central Armed Police Forces (CAPF) some of which are Central Reserve Police Force, Sashastra Seema Bal, Indo Tibetan Border Police, Border Security Force and Central Industrial Security Force. The CAPF have certain internal problems which have caused demoralisation and demotivation in its personnel. These problems have recently come to light.

The causes of these problems are manifold which are deeply rooted in years of apathy and lack of concern for these men. There is an increasing stress in the personnel. Even the government has admitted that stress was a serious problem in the paramilitary forces but said they were caused mainly by domestic problems, illnesses, alcoholism and financial issues. However facts reveal the other side of the story.

There have been high rates of suicides and fratricides (killing of colleagues) which have a higher number than similar cases in the army. These numbers are even higher than the deaths of CAPF personnel caused during their postings in hostile areas like Jammu and Kashmir and Naxal areas.

Another problem is that the government doesn’t treat these forces as organised services. Thus they don’t get monetary compensations, promotions and perquisites as other Group A services. There is denial of proper career advancement which acts as a disincentive. This is ironic considering that these forces         are given the tasks of army as well as policing against insurgents and terrorists are not even considered as an organised service. Even after several attempts, neither the government nor the courts have paid heed to the demand to make them into an organised service.

Non Functional Upgrade (NFU) is the name of a 2008 government scheme for Central Group A Civil Services, including members of the Indian Police Service(IPS), with automatic time bound pay promotions till the Higher Administrative Grade(HAG). NFU scheme ensures that all IPS and civil servants, at a minimum, retire at the HAG pay grade, a grade equated by Government with Lt Generals, Vice Admirals, and Air Marshals of Armed Forces. The promotions under NFU scheme are independent of organizational requirements, vacancy, level of responsibility or span of control of a post. This benefit is not given to Central armed police forces.

There’s shortage of man power in all the five CAPF forces. This is worsened by increasing number of voluntary retirements and resignations. The result is increasing pressure and stress on remaining personnel e.g long working hours upto 18hrs and they are sometimes not even allowed to sit down.

A major issue is that the personnel complain of denial of basic necessities. They do not get proper food, power, water, rations, medication facilities, accommodation, education for their children and are always fighting in hostile conditions as there is no concept of “peace posting”.

They do not get transfer allowance in most cases. Risking their lives for the nation, they do not get any risk allowance. If they die for the country they not only are not considered martyrs but their families also do not get compensation on time.

IPS officers, occupy the top posts in these services. First of all they are generalists who are not aware of the specific problems. Secondly, they are prone to transfers. Thirdly, they are termed as “outsiders” by lower officials and are alleged of not representing the issues of the security forces.  They are rather accused of just passing time during their tenure in security services.

The government has taken some steps on their part.

Risk and hardship allowance have been agreed to. Since 2014 hardship allowance in naxal area is to be similar to what they get in Jammu and Kashmir and North East. On the lines of American model in Afghanistan, they will get posting in the area of their choice once they complete their tenure in naxal area. Also, out of turn promotions are to be given for exceptional valour and service.

Monetary benefits under Modified Assured Career Progression (MACP) – given after 12,24 and 36 years of service. In other words, even without promotion, pay will increase.

Along with these, grievance redressal mechanism, improved living conditions, STD calling facility to family members, yoga, meditation and recreational facilities are also taken care of by the government.

In short, the paramilitary forces are demanding their due, which includes giving them organised service status, the NFU, allowances for hardship posting, timely career progression, better avenues for promotion, better infrastructure and martyr status when they die fighting. Given that they have been ignored for so long, they also want a separate Ministry to take care of their needs.

Multiple internal issues lead to stress and frustration in the CAPF which are the cause of their decreased efficiency. Considering the dangers involved of not satisfying their needs and basic demands, the government must address the remaining problems as soon as possible to ensure security and prosperity of the nation.