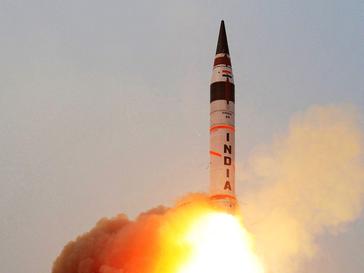 Agni is a family of medium to intercontinental range ballistic missiles developed by India, named after one of the five elements of nature. Agni Missiles are long range, nuclear weapons capable surface to surface ballistic missile. The first missile of the series, Agni-I was developed under the Integrated Guided Missile Development Program and tested in 1989. After its success, Agni missile program was separated from the IGMDP upon realizing its strategic importance.

It is a MRBM (Medium range ballistic missile) capable of carrying a conventional payload of 1,000 kg (2,200 lb) or a nuclear warhead. Agni missiles consist of one (short range) or two stages (intermediate range). These are rail and road mobile and powered by solid propellants.

The Agni-II is a MRBM (medium-range ballistic missile) with two solid fuel stages and a Post Boost Vehicle (PBV) integrated into the missile’s Re-entry Vehicle (RV).

It is an intermediate-range ballistic missile developed by India as the successor to Agni-II. It has a range of 3,500 km- 5,000 km. The missile is likely to support a wide range of warhead configurations, with a 4,500 km range and a total payload weight of 2490 kg.

Agni IV is an IRBM (Intermediate range ballistic missile) with a range of around 3500 Km. It is a two-stage missile powered by solid propellant. Its length is 20 meters and launch weight 17 tonnes. It can be fired from a road mobile launcher. This missile is under user trial by the SFC (Strategic forces command). After completion of all tests, it shall be formally inducted into the arsenal.

Agni-V is an ICBM (intercontinental ballistic missile). Although DRDO chief has described it to have a range of 5500 Km, a report in Global Times claimed it was somewhere around 8000 Km. The Agni-V is a three-stage solid fuelled missile. In future, Agni-V is expected to feature Multiple independently targetable reentry vehicle (MIRVs) with each missile being capable of carrying 2–10 separate nuclear warheads. Each warhead can be assigned to a different target, separated by hundreds of kilometres; alternatively, two or more warheads can be assigned to one target.MIRVs ensure a credible second strike capability even with few missiles.

As of now, Agni V has completed test launches and will be now subject to user trial by the SFC.