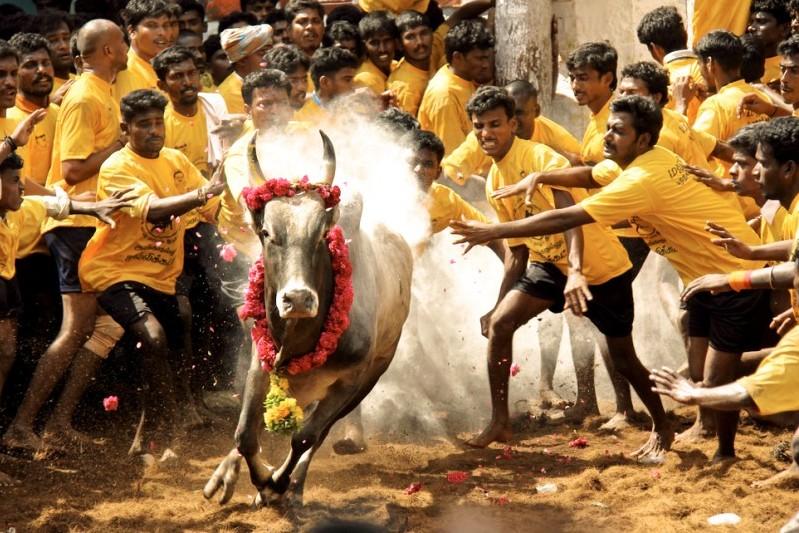 Supreme court in 2014 banned the sport jallikattu as it violates provisions of Prevention of Cruelty to Animals Act (PCA) and militates the constitutional duty of treating animals with compassion, Article 51A (g).

It also reiterated the expansive reading it had given in the past, to Article 21 (Right to Life), which prohibits any disturbance to the environment, including animals, considered essential for human life.

Tamilnadu govt. has come out with a legislation treating Jallikattu as a traditional sport and allowing the Jallikattu tradition with some precautions.

Jallikattu is derived from the words ‘calli’ (coins) and ‘kattu’ (tie), which means a bundle of coins is tied to the bull’s horns.

In older times, the tamer sought to remove this bundle from the animal’s head to win gold or silver.

He would be called ‘brave’ and ‘valourous’ and would also sometimes be rewarded with a bride.

The southern parts of Tamil Nadu witness bull-taming the most, with Alanganallur near Madurai hosting the largest and most famous of these events.

The Kalithokai poems depicted the mood of carnival where young men ‘embraced the bull’ (‘eru thazhuvuthal’) and tamed it. The focus of the poems is on the valour and the violence that accompanies this heroic feat.

Though there has been evidence from prehistoric times capturing bulls and attempting to tame them in nearly 70 ancient rock art sites discovered in Tamil Nadu, it is the modern Tamil literary prose where there is extended description of Jallikattu.

Unlike Kalithokai which is set in pastoral zone, the Kamalambal Charithiram has naturalistic locations of Madurai and Tirunelveli where the sport itself is overlapped in the dynamics of rural power structure.

In later books, the stories revolve around the sport being engulfed in caste conflicts and as a result of which, the festival is suspended. But then it is restored by the advent of the Gandhian movement and for the first time, the sport is celebrated as the valorous sport of Tamils. Over a period of time, there have been many novels, short stories and films made on this topic.

Considered the locus classicus of Jallikattu, Vaadi Vaasal, first as short story and then as novel has been in demand since its first publication in 1959. This indicates its literary merit but also cultural importance accorded to it. The history of the literary representation of Jallikattu is testimony to its long-lived attraction.

The sport, though undoubtedly is reflective of social inequities, but has not restrained to few dominating castes. By the 1980s, Jallikattu transcended its regional and caste definition and became emblematic of Tamil culture.

The sport is part of Tamil culture organised during the Pongal festivities.

The present form of Jallikattu involves mass-participant ritual of hundreds of men chasing a bull and trying to hold on to its hump or stop it by pulling at or twisting its tail instead of traditional form of one man against one animal.

Also, Jallikattu term in Tamil refers to coins tied onto the bull’s forehead, and the winner is said to have tamed the bull if he could take off the coins. Earlier, it was a rite of passage for a man seeking a girl for marriage. Thus, the meaning and essence of this sport changed over the years.

The Animal Welfare Board of India (AWBI)’s report submitted before the court in this case lists unimaginable forms of torture inflicted on the beast meant to help in farming — tails twisted and fractured, chemicals poured into the eyes, ears mutilated, sharp-edged weapons used to poke the animal, and intoxicants forced into its mouth.

All these and more take place right under the watch of officials.

The enclosures in the arena deny the bull food, water, or even space to stand.

In 2013, under the watch of the Animal Welfare Board of India, the onus was Tamil Nadu government to ensure that Jallikattu did not violate the provisions of the Prevention of Cruelty to Animals Act. But, the efforts to conduct a safe and cruelty free Jallikattu failed.

In 2014, Supreme Court judgment had termed Jallikattu ‘inherently cruel’ and specifically held that no regulations or guidelines should be allowed to dilute or defeat the spirit of a welfare legislation like Prevention of Cruelty to Animals (PCA) Act, 1960 and constitutional principles (Art 21, Art 48 and Art 51A).

The judgment had classified the bull as a draught animal not meant for running but walking under the Prevention of Cruelty to Draught and Pack Animals Rules, 1965.

The continued ban evoked strong response amongst the people in Tamil Nadu. And bowing down to popular sentiment, now the Tamil Nadu state government is trying to pass an ordinance to allow conduct of Jallikattu, which carries a serious risk of judicial rebuke.

Here, the bulls will be put in the list of performing animals in the state which will allow the conduct of Jallikattu.

The better way to handle the situation is to rather convince SC that a Jallikattu is possible where the safety of spectators as well as elimination of cruelty to animals is possible.

The tradition of bullfighting in Spain is cited to legitimise the conduct of Jallikattu and present it as a viable tourist attraction.

It is significant that the Spanish state of Catalonia banned the sport in 2012 after a prolonged ‘culture versus rights’ debate.

Is there a hidden agenda?

What was a rural, semi-urban protest, soon saw urban citizens of Chennai coming out in protest of Jallikattu ban.

Here, the instantly swelling protest has to do more with Tamil Pride than Jallikattu.

The Tamil people have been brought together for different reasons such as decades-long rule by two ‘exploitative’ political parties; the Centre’s stand in the last leg of the Sri Lankan war; the feeling of being abandoned in the Cauvery water issue; Kudankulam and GAIL pipeline projects, insistence on learning Hindi, the government’s cold response on the farmers’ issues for years; the drought, the Chennai floods, the Tamil fishermen issue, among others.

Though the current protest is about Jallikattu and Tamil pride, the people have long suppressed their dissatisfaction against centre and state governments. This youth agitation should be addressed before it takes gigantic form of lawlessness.

The Supreme Court in its recent decision has applied a ban on this practice on the grounds that it amounts to inflicting cruelty to animals. This is certainly a step which has conformity with constitutional and ethical principles:
1) Section 51(A) of the Constitution directs that state to prevent cruelty to the animal life
2) The “Essential Religious Practices Doctrine” prohibits any religious practice that is detrimental to public order, health etc. This practice certainly is dangerous especially to the kids who are engaged in it
3) Protection of environment is our fundamental duty and protection of animal life is instrumental to it
4) Intoxication of bulls is detrimental to their health

However, the decision also has some negative connotations to it:

The protestors have won the fight against the state but it needs greater introspection into the sport and its importance. If Jallikattu has to be a part of Tamil culture, it has to be conducted with protection to animals and human beings as well as regulated by an authority. Age old traditions and cultures need to be revisited if they are in violation with fundamental constitutional principles. Even child marriage was a cultural tradition before it was adjudicated as a crime.