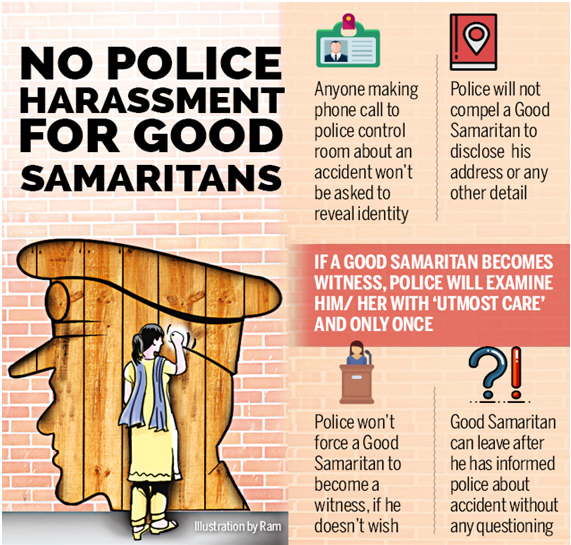 The President of India  has given assent to India’s first bill which will give legal protection to the good samaritans in Karnataka who help accidents victims with emergency medical care within the ‘Golden hour’. Now Karnataka has become the first state to give legal protection to good samaritans through a legislation due to rising incidents of accidental deaths in India, which saw 1,50,785 people getting killed in road accidents in 2016.

Who is Good Samaritan?

Good Samaritan is  “A person who with good faith, without expectation of reward and without any duty of care or special relationship, voluntarily comes forward to administer emergency care to an injured person.”

What is Golden Hour?

In medical parlance, ‘golden hour’ means the first hour after the accident.

Whats the objective of the Legislation?

It is found that bystanders often times refrainfrom helping accident victims due to the fear of legal and procedural hassles they have to face. The legislation aims to give protection to good samaritans and ensure immediate medical assistance for road accident victims within the ‘golden hour’ and encourage people to provide first aid to victims without fear of harassment in the hands of police and investigations.

Why the need for this Legislation ?

A good proportion of these deaths could have been avoided if victims had received emergency medical treatment on time. Even the Law Commission of India in a report has noted that over 50 per cent of road accident deaths can be averted with timely medical care within the first one hour. This led to 70,000 lives that could be saved.

This legislation is a huge milestone and will create an enabling atmosphere where bystanders feel protected by law and come forward to provide help to road crash victims. This will be a game-changer for Karnataka in reducing the number of road crash fatalities, the annual figure of which is around 11,000.

Features of the Legislation:

Experts often cite the ‘bystanders effect’ as one of the key reasons behind apparent public apathy.

The bystander effect or bystander apathy is a social psychological phenomenon in which individuals are less likely to offer help to a victim when other people are present. The greater the number of bystanders, the less likely it is that any one of them will help. Several factors contribute to the bystander effect, including ambiguity, cohesiveness, and diffusion of responsibility that reinforces mutual denial of a situation’s severity.