The task of integrating the tribal people into the mainstream was extremely complex. This was because of the varied conditions under which they live in different parts of the country, and their different languages and distinct cultures. The 1971 Census recorded over 400 tribal communities numbering nearly 38 million people and constituting nearly 6.9% of the Indian population. 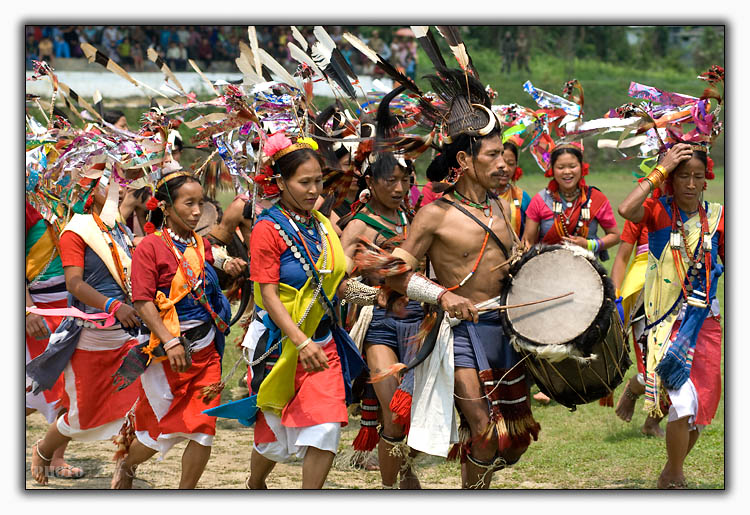 Effects of colonialism on Tribals
1. Isolation:
Their relative isolation was eroded by the penetration of market forces and they were integrated with the British and princely administrations.
2. Debt-trap:
A large number of moneylenders, traders, revenue farmers and other middlemen and petty officials invaded the tribal areas and disrupted the tribals’ traditional way of life.
They were increasingly engulfed in debt and lost their lands to outsiders.
They were often reduced to the position of agricultural labourers, sharecroppers and rack-rented tenants.

3. Missionaries:
Simultaneously, ‘missionaries were destroying their art, their dances, their weaving and their whole culture’.
4. Relation with forests:
Tribals depended on the forest for food, fuel and cattle feed and for raw materials for their handicrafts.
In many parts of India, the hunger for land by the immigrant peasants from the plains led to the destruction of forests, depriving the tribals of their traditional means of livelihood.
To conserve forests and to facilitate their commercial exploitation, the colonial authorities bought large tracts of forest lands under forest laws.
Laws forbade shifting cultivation and put severe restrictions on the tribals’ use of the forest and their access to forest products.
Roots of tribal policy
According to Our first PM Nehru Challenges in tribal integration
• To inspire them with confidence
• To make them feel at one with India
• To realise that they are part of India and have an honoured place in it
• India to them should signify not only a protecting force but a liberating one
Approach to tribal integration:
There were two major approaches regarding the place to be accorded to tribals in Indian society:
1. To leave the tribal people alone, uncontaminated by modern influences & to let them stay more or less as they were.
Problem: External influences had already gone too far into tribal areas to keep them isolated. Hence it was neither desirable nor appropriate to keep them isolated. Thus this approach was rejected.
2. Assimilating them completely and as quickly as possible into the Indian society. The disappearance of the tribal way of life was not to be regretted; it was to be welcomed because that would represent their ‘upliftment’.
Problem: Loss of the tribals’ social and cultural identity and of the many virtues they possessed. This was also rejected.
Nehru Approach
‘Making them an integral part of the Indian nation, even while maintaining their distinct identity and culture.’
Two parameters:
1. The tribal areas have to progress
2. The progress should be in their own way
The challenge was to combine these seemingly contradictory parameters.
The 5 guidelines also called Panchsheel for tribals:
1. Tribals should develop along the lines of their own genius- There should be no imposition or compulsion from outside
2. Tribal rights in land and forests should be respected- No outsider should be able to take possession of tribal lands
3. To encourage the tribal languages
4. For administration, reliance should be placed on the tribal people themselves- administrators should be recruited from amongst them and trained
5. No over-administration of tribal areas- The effort should be to administer and develop the tribals through their own social and cultural institutions
The measures undertaken: To give shape to this policy, beginning was made in the constitution itself:
Article 46: The state should
• Promote the educational and economic interests of the tribals, with special care
• Protect them from social injustice and all forms of exploitation, through special legislation
Schedule V & VI:
• The governors of the states in which tribal areas were situated were given special responsibility to protect tribal interests
• They were also given the power to- modify central and state laws in their application to tribal areas; frame regulations for the protection of tribals’ right to land; protect them from moneylenders
• Tribal Advisory Councils- In all states containing tribal areas; to advise on matters concerning the welfare of tribals.
Commissioner for SCs & STs: Appointed by the President; to investigate whether the safeguards provided for them were being observed
Political rights: Reservation of seats in the legislatures and positions in the administrative services for the STs.
Other developments
1. Legislative & executive action by the states- to prevent loss of tribal lands to non-tribal people and to prevent exploitation of the tribals by moneylenders
2. Special facilities & programmes- for the welfare and development of the tribal areas and the tribal people
3. Promotion of cottage and village industries and generation of employment
4. Large expenditures were undertaken and large sums set apart in the Five-Year Plans for the purpose
5. The funding for tribal welfare significantly increased after 1971
A Critical assessment of the measures
1. Weak execution of the well-intended measures- Due to divergence between centre and states & weak performance of Tribal Advisory Council
Administrative apathy
2. Lack of development of tribal languages- It led to slow spread of education among tribals
3. Weakness in the justice delivery mechanism & lack of awareness about legal system- It led to continued alienation of tribal land, indebtedness, bonded labour
4. Development of class differences among tribal societies & upper class tribals co-operating with non-tribals- This led to inter-tribal conflict and discontentment