The Nobel Prize in Economics (or more volubly the Swedish National Bank’s Prize in Economic Sciences in Memory of Alfred Nobel), was first awarded in 1968 based on a donation from Sweden’s central bank, on its 300th anniversary. It is thus the youngest addition to the Nobel prize family and each year recognizes an outstanding contribution to the economics field. 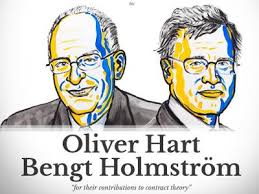 Professor Oliver Hart, and Andrew E. Furer Professor of Economics at Harvard, has been jointly awarded the Nobel Prize in Economic Sciences.

Professor Hart shares the award with Bengt Holmström for their contributions to contract theory – work which “lays an intellectual foundation for designing policies and institutions in many areas, from bankruptcy legislation to political constitutions” the prize awarding body said.

What is contract theory?

Contract theory aims to further our understanding about how actors in the economy build contractual arrangements between themselves. In particular, given that contracts are often developed under incomplete information, or asymmetric information (when one party has more information than the other in the transaction), it explores ways to overcome suboptimal outcomes brought about by fears of “moral hazard” or free riding. How can optimal contracts for all parties be built under such constraints?

Optimal contracts can be developed by modelling behaviours of decision makers under different assumptions, and then applying specific rules to encourage optimal decisions (where both parties in a transaction are better off). The idea is to find ways to get actors to take appropriate actions, for example in the cases of selling used cars, taking out insurance or devising employment contracts.

What is so special about this contribution?

According to the Nobel Committee, the initial contributions of the two winners “launched contract theory as a fertile field of basic research… we now have the tools to analyse not only contracts’ financial terms, but also the contractual allocation of control rights, property rights, and decision rights between parties. The contributions by the laureates have helped us understand many of the contracts we observe in real life.”

In other words they have contributed a very valuable tool for the functioning of everyday transactions. In an economic climate characterized by so much uncertainty and distrust, this is an important contribution, and one that will remain useful for years to come.

Contract theory helps us understand these problems. And helps us solve them through better contract design. Take a simple informal contract. A harried mother has to leave the house for a couple of hours. She is worried her two children will bring the house down by fighting over a large piece of cake in the refrigerator.

The mother leaves a simple instruction—the elder child will cut the cake while the younger one will choose which piece to eat. Now, the elder child cannot cheat. The mother has aligned their interests—or achieved incentive compatibility—through an informal contract.

Practical Utilization of  theory for India:

“The contributions by the laureates have helped us understand many of the contracts we observe in real life. They have also given us new ways of thinking about how contracts should be designed, both in private markets and in the realm of public policy.” The use of contract theory in public policy is something that the Indian government needs to learn, be it the design of telecom auctions or the public distribution system.

Through their initial contributions, Hart and Holmström launched contract theory as a fertile field of basic research. Over the last few decades, they have also explored many of its applications. Their analysis of optimal contractual arrangements lays an intellectual foundation for designing policies and institutions in many areas, from bankruptcy legislation to political constitutions.

The fact that the 2016 Nobel Prize in economics has gone to two giants of contract theory tells us something else as well. Most of the public attention is lavished on macroeconomics and the related dark art of forecasting. This is where the crisis of economics is the deepest.